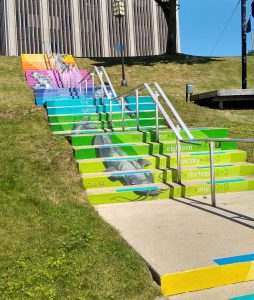 Public art can help define a place and inspire conversation.  The recent public art additions in Mount Clemens have done just that.  The interest has been steady with many community members following the progress closely.

The projects were funded through the KaBoom! “Play Everywhere” grant in conjunction with the Ralph C. Wilson Jr. Foundation. The grant works to bring “play to unexpected but everyday spaces, making it easy and available for kids and families.” It was awarded to Advancing Macomb in partnership with the City of Mount Clemens, the Macomb Family YMCA, and the Anton Art Center. 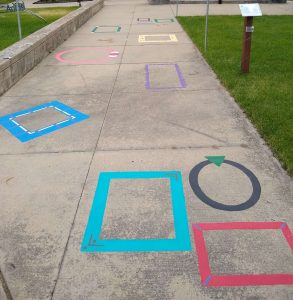 The artists for the two larger art pieces – the Clinton River stairs and the Cherry Street Mall Mural – commented on the many members of the community who stopped by while they were at work to inquire about the design, show their support, offer them refreshments, and to share their thoughts and memories of Mount Clemens.

Artists Angelika Wynes and Alana Wynes of the Cherry Street Mall Mural remarked that “many families have come by the mural and have referred to the work as a “true history lesson” about our city. Many, especially teens, have come by and have learned new information they’ve never before been introduced to. Selfies and photoshoots have definitely been a highlight….We too have been impacted by all the residents coming by and sharing their stories with us. It has inspired our work in multiple ways. We’ve added new details to our works based on community input.”

Some of the experiences they described: 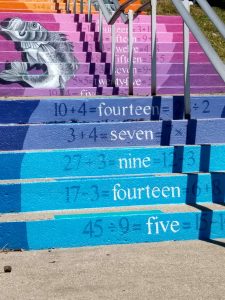 The Clinton River stairs artist, Wendy Popko, added “While I was working on the stair mural in downtown Mount Clemens, I met several residents and non-residents of all ages. But there was a 10-year-old boy named Cam, who was on a walk with his mom. They stopped by to see what was going on, and I could hear Cam muttering the equations and how he knew the answers. How “easy” they were. Just as Cam and his mom started to walk away, I said, “Did you solve the puzzle?” And that’s all it took. Cam wanted to know more. I gave him the clue (the answers to the “simple” equations represented the letters of the alphabet. 1=A, 2=B, 3=C, etc.). Cam couldn’t wait to solve it. I gave him a sheet from my sketch pad, and off he went climbing the steps to crack the code. It took him about 10 minutes to solve the puzzle. He thanked me, and his mom took a picture of the two of us together in front of the mural and shared it on social media.” 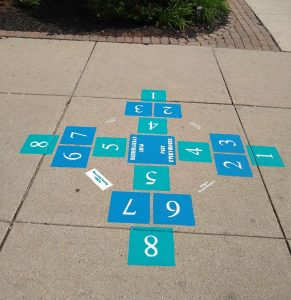 Popko continued, “Another moment that comes to mind was when a group of teenage girls walked by on their phones. They looked up momentarily to see the mural and went back to their devices muttering something about it. I said, “And it’s a puzzle!” That got their attention. I gave them the clue, as I did with Cam, and they too set off on their puzzle solving adventure. When they were done, they told me what the message said, and then they thanked me. I was surprised that the teens would enjoy it as much as a 10-year-old. But as the teen girls pointed out to me, it was something new. It was old school. It wasn’t an app on their phone. It held their interest and was a fun little activity that filled a small block of time.” 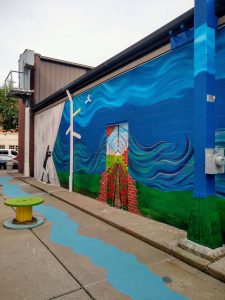 The two smaller installations brought together a group of volunteers through Advancing Macomb and the Anton Art Center to create a compass shaped hopscotch at the Macomb Family YMCA and a variety of painted picture frames on the sidewalks in front of the Anton Art Center. Both locations encourage interaction from the community. A quick game of hopscotch on the way in or out of the YMCA. Creating chalk art masterpieces in the frames at the Anton.

The projects were revealed to the public on June 8 during the SUPER SatARTday celebration of art and the community by the Anton Art Center.  They are four new colorful additions to the numerous public art pieces already in Mount Clemens.

See more on what the artists had to say in the pieces below.

Coverage of the installation: